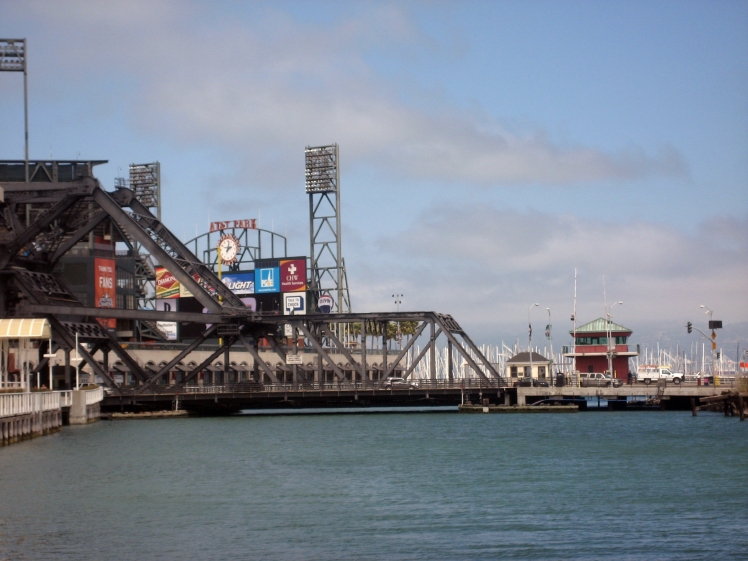 A little bit of history about our continuing Urban Walk series.  When Christopher and Rebecca relocated to San Francisco, it gave me many opportunities to baby sit, Lucy, which translated to my spending several days at the Loft on Portero Hill.  It becomes a mini-vacation for me and an opportunity to see friends living in the area a bit more readily than I do in Sonoma.  When Caroline and I started training for our Big Sur 1/2 Marathon, we decided to add some urban walks to the training; after all there are lots of hills in San Francisco – a good workout is a given.  Not to mention there are sooo many neighbourhoods that I have never been in and certainly not on foot.  Our first walk a few months ago concentrated on the murals in the Mission, Noe and Bernal Heights; truly a visual delight. 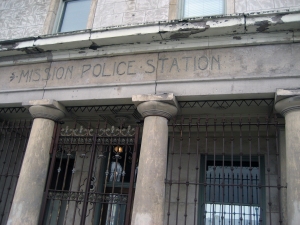 This time we decided to walk from the Loft to Golden Gate Park.  The advise of Christopher was simple – walk UP 17th to Stanyan – easy enough.  Caroline takes BART from the East Bay and walks down 4th where she meets Lucy and me. We then  head back to Portero to begin the route.  It was a very cold, foggy and yes, dreary day in San Francisco – even in Portero which is often sunnier than other parts of the SF.  We got Lucy settled and off we went.  I checked my simple supplies: phone, camera and lanyard around my neck with Loft keys – I have become obsessive about these keys.  What happens if I forget them?  How do I get into a three story concrete building where I know nobody and once in is there a key really hidden on the rooftop terrace? Best to be obsessive.  Less than a mile into the walk is a Whole Foods where I wanted to stop for other kinds of supplies and in the window was a ‘bike map’ of San Francisco outlining a route similar to ours – we made note of the deviations and continued on.

The first part of the walk is through a mostly industrial area with some incredible old buildings including the Mission Police Station, built in 1902 which I just loved.  The photo, unfortunately, does not do it much justice and it was abandoned in the mid 90s for the new station on Valencia.  I don’t know if this facility has been used since.

We reached 17th and Market which is in Eureka Valley and the beginning of SF’s famous Castro District.  Think Harvey Milk. The Castro is one of America’s first, best-known and largest gay communities.  The Castro Theatre which is still in use was built in 1922 by the Nassar brothers for a cost of $300,000.  We lost 17th Street and rather than look for it in the hoardes of people going into a very large BART station we went down a few block of Castro Street and circled back around.  17th was on the other side of Market Street which does not end in the Muni Tunnel, but continues up the hill towards Diamond Heights. 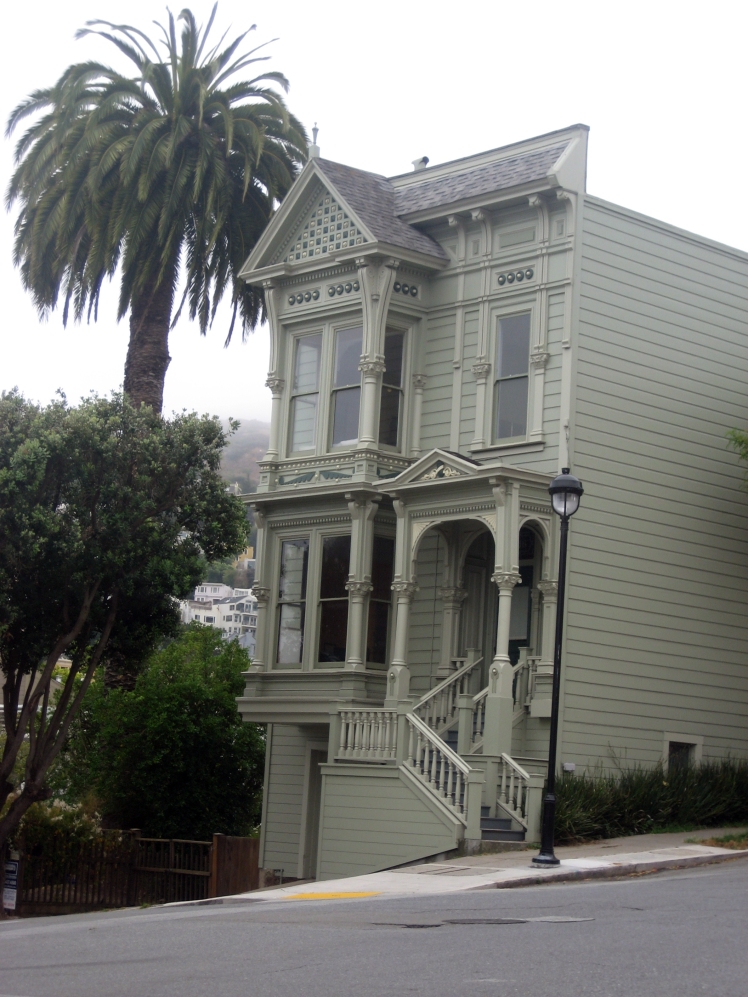 We spotted Corbett Street which was the bike route and started UP it.  I have never been here before and it was absolutely beautiful with incredible views – if only we could take advantage of them.  We stopped to talk with a local resident to ask the name of the neighbourhood and were told: Upper Market.  We reached the top of Corbett and Clayton with the directional sign pointing out landmarks including the zoo which seemed many miles away.  Market Street also ends a block from here and we thought we were at lower Diamond Heights as we could see it in the distance. 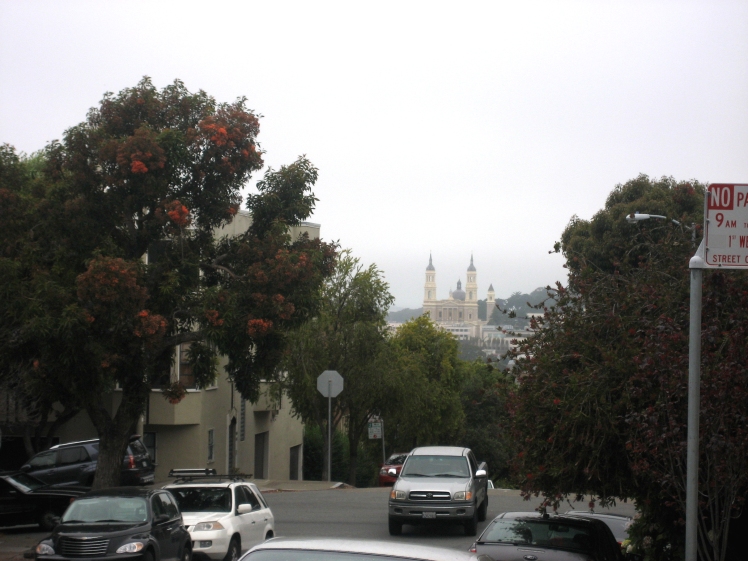 We then turned right up Clayton to Ashbury Heights where I found another dream home at the corner of Belvedere and Carmel.  We were now on Cole Street entering the Cole Valley neighbourhood and greeted by a stunning view of St. Ignatius Church built in 1914 and a part of the USF campus.  Christopher had his high school graduation from St. Ignatius College Prep here (another walk!).  On Cole Street we found a delightful French bakery, La Boulange de Cole, and were overwhelmed by all the choices of pastry, sandwiches, lunch and brunch specials and I decided on an unknown pastry with a most delicious whipped cream filling.  I came to find out that this wasn’t a local neighbourhood find, but part of a locally owned bakery group, The Bread Group, with a dozen locations throughout the City (hmm, we could walk to all of them!). 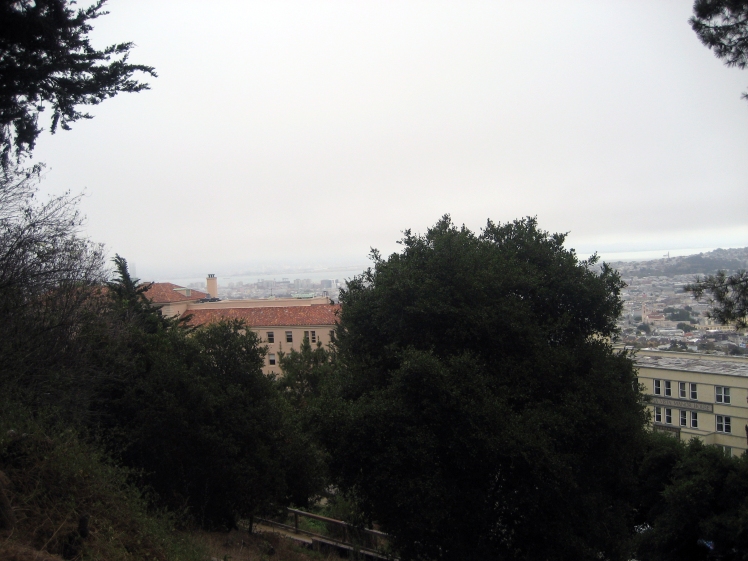 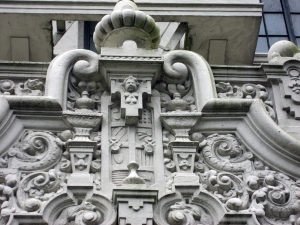 We went down Cole to Haight Street and back in time to a tie-dyed era.  It was here we made the decision not to go a few more blocks to Golden Gate Park, but to go UP the hill to Buena Vista Park since we had never been there.  This is the oldest park (1867) in the city orginally called Hill Park and in 1894 renamed Buena Vista.  It is 37 acres and is on a steep hill with a height of 575 feet and has a variety of trees that have been categorised and replanted since the onset.  We climbed to the top and on a clear day………….  The houses in this unknown neighborhood were lovely many with big views.  A local resident thinking we were lost gave us some things to see including hidden steps and a must hike up Corona Heights Park which was next to Buena Vista Park and home to the Randall Museum.  When we looked at the map, we realised we were very close to Castro and 17th and decided to save these suggestions for a sunnier day!

We were now on Park Hill Street and decided to continue up it since it was so pretty and the buildings so old – if only we knew their history.  The picture of Caroline is taken on the corner of Duboce and Park Hill – another picture perfect view!  As we continued up Park Hill, we were greeted by amazing buildings which looked to be part of a Catholic complex of some sort.  Once we reached the main and very gated entrance, we were greeted with the simple sign, Park Hill and once again expansive views.  We were told by the only person in sight that these were condominiums and the former St. Joseph’s Hospital.  I remember the hospital and wanted to know what happened to it.  It appeared briefly in Vertigo, the Hitchcock film.  Founded by the Franciscan Sisters in 1889,  the campus was built in 1928 and closed in September, 1979.  An article in the SF Chronicle, in November 1979, states that the facility was struggling, there was a glut in the hospital business and there was some controversy over licensing.  Today, two bedroom units rent starting at $3500/month.  I wonder who owns it now?

We continued down to lower Haight Street, Divisadero and Hayes Street with a stop at Alamo Square Park in the Western Addition. The Park at the top of a hill (what a surprise!) is four city blocks and what makes it so well known is the number of distinctive mansions along the perimeter.  Known as ‘postcard row’ or  the ‘painted ladies’ these Victorian houses are painted in three or more colours that enhance their architectural details and in this setting are a stark contrast to the modern buildings in downtown San Francisco in the background.   And, you would think we had come on a pilgrimage.  So many people, cameras and double decker buses.  Mrs. Doubtfire was a movie that immediately came to Caroline’s mind when she thought of these houses – but they seemed to be much more colourful in memory.

It was into Hayes Valley we went and onto Market Street where we saw even more people. We walked past the Orpheum Theatre (1926) where one can see touring Broadway plays and the Warfield Theatre (1922) which features venues of live shows (Jerry Garcia was one of many who performed here).  I left Caroline at 4th and Market to head back to Portero while she got on BART back to Berkeley.  On my way home I passed the Metreon Center, Yerba Buena Gardens, Giants Stadium and the new UCSF Mission Bay Campus.  Lucy was glad to see me and being the chic urban dog,  I took her across the street from the Loft to her doggy park, Pennsylvania Gardens, built in 2008 with an amazing array of beautiful seasonal plantings and views. They take donations via PayPal and Lucy makes her monthly contribution!