Just because of the name, I had to sign up for the inaugural Moo-Cow Half Marathon which is part of Chicken and Cow Productions (they also produce the Petaluma Footrace in conjunction with Petaluma’s Butter and Egg Week). Their main sponsor was Strauss Family Creamery who sells their milk to stores in reusable ‘glass’ bottles!!  I talked Sheila and Caroline into it as well – Caroline and I could use it as a training race for our Big Sur ½ in November –  I remember telling Sheila that we had plenty of time to get in shape.  Well, it seems we were in better shape when we signed up then on race day.  The majority of the course is in western Petaluma and just why I thought and kept repeating that it was a ‘flat’ course, I will never know (total elevation gain of 1,109′). This is the description on the website and not in small print:

The Petaluma Moo-Cow Half Marathon is no ordinary half-marathon. If you’re tired of those boring “flat and fast” half’s, this one is for you! We take you from Historic Downtown Petaluma all the way out to some of the great farms of Sonoma County, where you will be cheered on by sheep, horses, and of course our beloved Moo-Cows! The trip out there is a challenging one, but the inclines just make the views of those rolling hills even more rewarding!

The morning started out in a bit of frenzy when I saw that my beloved Garmin watch was frozen with last night’s time on the face and there was nothing I could do to reset it.  I found there were no Garmin representatives working at 5A on a Sunday morning anywhere (guess they don’t out source).  I am a number’s junkie, what was I going to do without my data and what were we going to do without knowing our pace to meet our goal of under 3.5 hours!  As Caroline said, “looks like we are going retro on this one.”

We arrived at the start (which was right in front of my favourite yarn store) with ample time and I noticed the sun rising – sun! there hasn’t been sun before 10 a.m. for weeks.  All the runners had discarded their outerwear and I was cold standing there in my fleece jacket waiting for the start. Knowing I would be wearing this around my waist long before the finish of the race I still opted to keep it on.

Off we went – literally , yards into the race my GERD started acting up.  Not the burning sensation in the chest, but an overall acid feeling in the throat.  Very unpleasant!  I was disappointed, unhappy, frustrated and just generally out of sorts.  I wanted to finish this race feeling strong after the Bear Creek ½ last month.  But, there was no way I could ignore this for 3+ hours so I decided I would just do the 5K.  The turnaround point came so quickly, I made the decision to go on as I could always turn around at any point on the out and back course.  The unpleasant feeling abated as quickly as it had come on  – very odd – another email to the doctor! 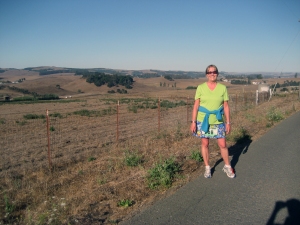 The course was pastoral and lovely and we saw and smelled many a cow along the way.  The course was also open to traffic which I did read about on the website, but this was not a concern as there were few autos that passed us.  Needless to say, we were at the back of the pack and the biggest challenge was to extricate ourselves from a group of creatively costumed cows that were doing the course in a very strange walk/run fashion.  They would run for an extremely short amount of time then literally stop in front of us and walk very slowly.  Even though we were walking, we were keeping an even pace and their disregard for others in the narrow bike lane was interesting.  We finally broke free on the looong up hill and, thankfully, never saw them again.  At mile 5 the lead runners passed us and then the bikes came – many, many bikers doing the Waves to Wine Race.  For several miles, I felt like I was part of this huge outdoor play ground; it was wonderful!

We walked the first half of the race and at the turnaround I thought it would be efficient for me to run the downhill portions and there were several upcoming sections.  Sheila joined me and Caroline caught up with us in the last mile running the flatter sections so as not to aggravate her knees.  One of our discussions was how we had to let go of what we once accomplished.  My goal was always to finish a ½ in under 2 hours, but that was running and not walking; it was hard for me to accept that I would never have a running PR again.  But as Sheila (who is Boston Qualified) said if we didn’t come to terms with this we would never get out on a course again.  Today would have never happened.  Anybody reading this blog, please get out there and have fun – goals change as do our bodies!

With less than a mile to the finish line and right before Caroline caught up, I managed to trip over thin air and go crashing to the very hard, rough road.  I scraped up my knee, and hand and crushed the face of my Swiss Army watch.  Nothing to do but get up and quickly get to the finish to have somebody attend to my rather bloody hand.  Not that I haven’t done this before.  My legs have so many scars, but I don’t think I have fallen on such a hard surface before; I typically save this for trails.

We crossed the finish line in 3:11:48 with a pace of 14:38.  In looking at the results there were several women in our age divisions compared to the last race where Caroline and I were the only ones in our divisions.  This was very refreshing and I was so pleased to see others out there trying for PRS in new categories.  We beat our goal and other than looking like a character in one of the Coen Brothers’ films, I felt a lot better the last mile than I did the first.  After the trail ½, I needed this confidence booster! We did not receive a medal.  We received a cow bell.  I love cow bells and it brought back memories of our sweet dog, Magoo, who wore one on her collar.  I still miss her!

The medic attending to my hand was great.  He got it fixed up in no time albeit it a bit painful as he tried to clean the road rash from the palm.  Delicious Strauss Creamery yogurt was delivered to me.  Everybody had gone home – another thing that is hard to get accustomed to – since we finished so late!

One of the things I noticed in this race was the large number of young people participating in either the 5K or the ½ and all the aid stations were manned by teens.  It was fabulous;  yet in my mind unusual, so I asked a volunteer about this.  The production company and Footrace (in its 7th year) were started as a senior high school project by two boys.  They have since graduated college and still live in Petaluma.  All of the proceeds from the two races go to the public schools which they attended.  How great is that? This was a perfect sized race and I hope it doesn’t grow too much.  Everything seemed well run and the CHP were just fantastic.  I would definitely do this again – hills and all! 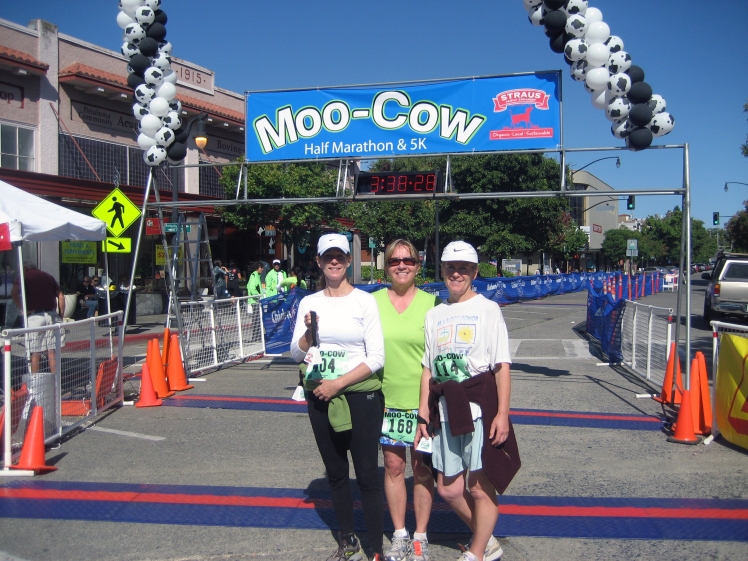 When we got back to the cars, my Garmin had a blank LCD.  Maybe not good, but at least a change!  Once back in Sonoma, I stopped at the drug store to load up on first aid supplies and then jumped in an Epsom salt filled tub!  My t-shirt is soaking to remove all the blood and Garmin seems to have come back to life and is charging.  These races are not for the faint of heart!  Thanks Sheila and Caroline for a great morning!  Life is good.